Imagine with me for a moment that you’re a vegan. You have chosen to never consume animal products based on a variety of reasons, to the extent that everything you use whether it’s the clothing you wear or the food you eat reflects this conviction. But let’s say you just want to go to a restaurant with some non-vegan friends on a Friday night. Suddenly, no matter where you go, a regular evening out at a restaurant morphs into the familiar boredom of being given only one edible option for dinner – a salad.

So what do you do?

If you’re Matthew Russell of Grand Rapids, Michigan, you just start your own restaurant with like-minded individuals. I had the opportunity to interview Matthew recently and ask him all about himself and the amazing cooperative restaurant that he co-owns in Grand Rapids called Bartertown Diner.

So Matthew, how does being a vegan change the way you go out to eat as compared to the typical omnivore?

I guess I’m used to not being that impressed at most restaurants; that what I expect going in, based on how many items are on the menu that I would actually eat. There are typically only 1 or 2 on each menu, and maybe only 3 or 4 restaurants in the Grand Rapids area that actually have a good selection. So I’m usually stuck with a salad or maybe stir fry. Usually Asian restaurants do a really good job of having choices. Or Thai and sushi places; they do really well with vegan food, because a large portion of their culture has vegan tendencies. Those are always easy spots to go to. Most American places, they just kind of see veganism as a novelty or a fad diet. There’s no thought put towards someone who might live that way because of the way they feel towards animal equality.

Why did you want to start a restaurant?

When we started, what we imagined in our minds was a place that we all wanted to eat at. We knew there was a growing demand for vegan food in Grand Rapids, but as far as seeing an available niche that we could tap into, that really wasn’t the point. The point was to open up a place that was worker-run, that would be mainly vegan, and to have a space that anyone in the collective could use if they needed one for a special event. And interestingly, there hasn’t been a worker-owned, worker-run restaurant in this area since the 1960s, so this was a really big step for us. And because of our ideologies, it was just a natural decision that it would be a vegan restaurant. So, what is a cooperative restaurant exactly and how does yours work?

The Bartertown Diner is a collective of several founding members who came together, all pitching in and using their knowledge and funds, plus a successful Kickstarter campaign, to finance and create a restaurant based on the cooperative idea. We started everything in January of 2011 and we were open by July. It’s a collective which means there are 8 core members right now and everyone has an equal say in how the business is run; there are 8 part-owners. We have meetings every week and everyone can vote on whatever needs to be discussed. Different people have different positions like, for instance, I’m the Internet Officer, so I run the website and I do a lot of our marketing and content creation for the website. Another person is in charge of making sure we have all the produce at the right times, another person is in charge of server schedules and policies, another deals with bookkeeping, and so on.

How do you decide what food to serve at Bartertown Diner?

We started by creating vegan versions of things you would find in other restaurants and we’re on our 5th menu now. Lately, we’ve been using a lot more original ideas. We change our menu about 5 times per year, which is all based on seasonal produce. So, sometimes we run out of a certain thing because it’s not in season. We believe in sourcing our foods locally and sustainably, so we wouldn’t just run to the grocery store to replace an item and we know some customers might get frustrated with that. But for the most part, they understand that we work with farmers who grow organic produce, and there’s only so much of that. Probably 99% of the items that we serve are organic and that’s the way that supply goes. Because at Bartertown, you get the experience of coming in and getting what is fresh and in season and we try to make it special for each person that comes in.

Even if you can’t find something that was on the menu before, we always have new seasonal specials that highlight special produce. Like right now we’re doing a lot with wild ramps, which are wild, young onions. They’re a little spicy, similar to garlic.

And we’ve sauteed them, we’ve made vinaigrette with them; they’re pretty versatile but they’re only around for like two weeks. And then year-round we have all sorts of dry beans because Michigan is one of the major states in the country as far as bean production goes, so we really try to take advantage of these local products.

Do you have any plans to expand Bartertown Diner?

Even though the restaurant is always full and sometimes we have a line out the door, if we were to expand, I don’t think it would be in a typical franchise sort of way. We would love for more restaurants like Bartertown to show up, but we would also love to just have people come in and we would teach them how to do a worker-run restaurant and show them what great vegan food can be like. And if they want to open a restaurant called Bartertown, that’s great. If they just want to learn those things from us, that’s great, too.

Where do you see Bartertown going in the future?

Our business plan isn’t to be competitive, but to cooperate with other places. We all are really proud of Grand Rapids and even a bit possessive about it. We see a large call for unique restaurants and retail places. It’s not our goal to compete with people, but to make Grand Rapids a sustainable community, where you can live off what’s grown in West Michigan. There’s a lot that just goes unnoticed, and for that reason the small farmers find it hard to support themselves, because what’s sold in the stores is not their products, it’s products from major subsidized farms, or other countries.

No one in the collective really wants to own a chain of restaurants; that’s just not in any of our career goals. So I think the main thing is making our restaurant an institution of learning, whether it’s cooking food, or working on a collective. For example, we give free classes each week on Tuesday nights – on topics like green smoothies, working with dry goods, and creating economical meal plans. We don’t charge for these classes because to us, it’s payment enough that they take away some knowledge. We’ve done one on using interesting fruits and vegetables that are in season that aren’t necessarily very well-known like ramps, kale, and garlic mustard greens, which is actually an invasive species in MI, like a weed. We have a few recipes that use those greens, and we tell people things like, for instance, if you have them growing in your yard, you can actually forage for them, and that some farms will actually just give them away.

And in the same way that we were surprised that people actually came into our restaurant in the first place, it’s great that people want to learn about different aspects of veganism, too.

Besides free classes and supporting local farmers and sustainable agriculture, how else do you interact with and support your local community?

There’s a Fulton Street Farmers Market where we’re hoping to set up a booth and sell sandwiches every morning. There’s a store called Tree Huggers with locations in Grand Rapids and Holland that sells things like housewares and baby products, which are all made from recycled or sustainable materials. They run a pretty large recycling outfit and we’re talking with them to possibly turn half of the store into bulk food grocery where we can also offer some Bartertown to-go food items. They help us with our recycling a lot, too. Bartertown has actually gone as much as 4 weeks without dumping out any landfill-bound trash and usually every week we have no more than about a gallon of landfill trash per week.

If you could distill the message of the Bartertown Diner into just a few sentences, how would you describe it?

We focus on public collective works. Sure, it’s vegan, and a lot of people come because we have great food, but the idea behind it is that we’re not working for anyone. We don’t have to; we’re not just coming in for a day job and getting paid 7 dollars an hour while some unknown guy takes in all the profits.

We’re not working for anyone but ourselves.

So what made you choose the name Bartertown?

It comes from the movie Mad Max 3 Beyond Thunderdome. It’s an interesting movie; I wouldn’t say it’s good… 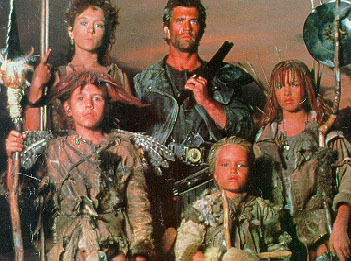 If you get a chance, please check this out for me as soon as possible because I can’t make it up to Michigan any time soon and my mouth is watering like crazy thinking of all the deliciousness going on there. Oh, and just to torture yourself a bit more, here is the link to their drool-worthy menu in all its gloriousness. I mean, “Chickpea Melt: Mashed chickpeas, onion, bok choy & dill mixed with veganaise, on grilled wild rice & onion bread or over a bed of greens.” Come ON! Do they deliver to Florida?

If you have been to this restaurant before or get there based on this Hot Plate profile, please let me know what you thought in the comments section below!